Of all the C-141 Wings in the US, the 446th had the best C-141 airdrop program of them all. Unlike the 452nd that only went to Desert Center, dropped cargo and went home, the 446th planned awesome airdrops. One time, we did a three ship from McChord to Savannah, Georgia. On this particular trip, the back of the plane was loaded with over 150 Fort Lewis Rangers outfitted with full paratrooper gear. These fellas were sitting tightly together. So tightly that there was zero space between them and they were knee to knee. This particular airdrop would  air refuel over Montana or somewhere over the Great plains. Once the three ship Air refueling was complete, the three ship would then fly to Georgia and then enter a low-level track to a drop zone close to Fort Stewart .

The airdrop mission lasted close to 6 hours.  During this entire time, the Rangers could not move, stand or shuffle their feet. So, it was 6 hours in one position and sitting erect with a parachute in one’s lap.

When the three ship descended to 300 feet AGL and entered the low-level route, the temp on the ground in August was over 100 degrees. Soon the interior of the aircraft would be stifling hot. Even with max cooling air and the ram air circuit protection pulled, the back of the aircraft was heinous. Not only that, at 300 feet and 300 knots, the aircraft bounced around  because of  thermals related to terrain features , rivers, and clouds etc. So, there they were, 150 paratroopers in a sardine can being tossed around in turbulence while in a 100-degree aluminum tube. manly men doing manly things.

The Rangers kept their shit together for a little while during the low-level route. On this leg, I was the scanner so I sat at the flight deck door and simply watched. About 20 minutes into the low level, the first guy puked on himself and was not able to open up his puke bag. For those sitting next to him, it was a real treat. A few moments later and the next guy puked. It wasn’t long until almost every other Ranger was puking his guts out. By then, the entire  “tube of pain” smelled like vomit. Then we stood them up and kicked them out over Taylor’s creek drop zone in  Georgia somewhere. Hoo fucking rah.

If the Rangers did not puke, a nasty Loadmaster would simulate puking some green pea soup into an alligator baggy. Then he would pass the baggy to another load and he would drink the simulated puke up while the Rangers looked on. We did not have to do this on this particular trip. More than 50 Rangers heaved their guts and we had a glorious Ranger puke fest on our hands.

The Rangers would spend the night in the forest of Georgia. The flight crew would spend the night at a 3-star hotel in Savanah. The evening would be spent drinking beers, eating hot wings, and listening to “Rock and Roll” at the bars along the Savanah river. One bar had a guy that could play hundreds of different songs. he had a book of songs that he would play. I picked out a few John Cougar Mellencamp and Creedence Clearwater songs and tipped him a Fiver.

The next day would be spent touring Savanah and looking at all the beautiful centuries old homes that were not burned during Sherman’s March.  Ya gotta be tough to fly the heavies.

Of course, the 728th crew performed the mission in a safe and impeccable manner beyond reproach.

We were the Flying Knights and we simply did it better…… 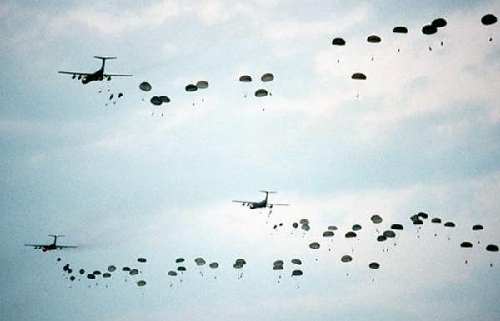